Functional training is one of the current buzzwords in fitness. Here at Core Fit ‘N Motion, our workouts fit into this category. But what does this mean? If you Google “Functional Training” you will find over 21.8 million hits. Wikipedia defines Functional Training as “a classification of exercise which involved training the body for the activities performed in daily life.” Daily activities have one thing in common: Movement.

If functional training really comes down to movement, how do we consistently measure movement and determine if we are making progress? The answer is: The Functional Movement Screen (FMS). The FMS was established in 1995 and is being used by fitness professionals, physical therapists and sports teams around the county. The FMS involves 7 movement screens with 3 clearing tests for pain. Based on the results of the screen, a specialized corrective strategy can be developed. The screen only takes 10 minutes to complete.

I (Alan) spent three days at the Levels I and II Functional Movement Screen seminar in April. I’ve since passed the certification test and have been using it in our gym. Today, I saw one of our members get into the deep squat unassisted due to progress made through corrective exercise strategies developed as a result of the screen. One of the attendees at the seminar is an athletic trainer for the St Louis Rams. He told me that every athlete at the NFL combine must take the FMS.

The key points presented at the seminar were:

I would add that micro trauma leads to injury. 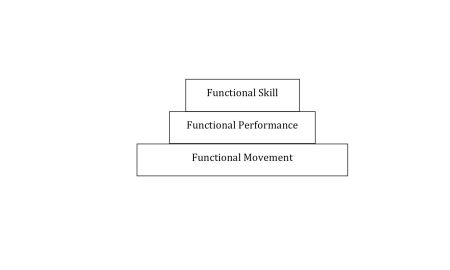 The idea here is that you should first have the ability to move through fundamental patterns. Once you can move freely, then you should work on power and strength through the movement pattern. The top pillar represents athletic skill development.

Many of today’s athletes and general population spend a majority of their time working on Functional Performance and Functional Skill without first having established the ability to move freely (Function Movement). We would consider this person to be over-powered; their ability to generate power exceeds their ability to move freely. This person would greatly benefit by improving functional movement patterns. I heard it described at the seminar that this type of person is like a race car driver with clown shoes. The person is operating a very fast car, but every time he presses down on the gas pedal, he also presses the brakes.  Learning how to depress the accelerator without also pressing on the brake will allow the car to operate faster and will reduce the chance of breakdown due to overheating brakes.

Call or stop by today to learn more about how we can help you better move.

People interested in joining often call and ask about the benefits of kettlebells and our training. Some think they will still need to do “cardio” in addition to our workouts. The Suunto has shown that our workouts give plenty of cardio.

After each workout, each member is sent an email that shows the statistics of the workout. Specifically the report shows average heart rate, peak heart rate, calories burned and how much time was spent in each zone relative to maximum heart rate (<60%, 60-70%, 70-80%, 80-90% and 90-100%). The system also gives a training effect 1: Recovering, 2: Maintaining, 3: Improving, 4: Highly Improving, and 5: Overreaching. Most of our workouts have provided a Training effect of 2.5 – 5.0. The system has allowed individuals to train smarter instead of harder, and is helping keep members from over-training. The system also provides feedback to track results. It’s been interesting to see caloric burn; on the low end some have burned as little as 300 calories in a 45 minute workout and on the high end one burned over 700 calories during a different 45 minute workout.

Seeing each person’s heart rate percentage on a large screen monitor during the workout allows us to make on-the-spot changes to the workout for the group and individual to maximize results. We’ve even been able to change up the workouts extending or shortening break periods to keep heart rates up, or to provide adequate recovery time.

Are you interested in training smarter and being able to track the results of your workout? If so, come in and check out the Suunto Heart Rate Monitoring System!

We will be at the Delano Health & Wellness Expo this weekend. We have a large booth at the expo. The expo is a fundraiser for the Delano Fire Department. As a result, we will not be having class this Saturday.

Our booth should be large enough to bring our short set of ropes. The Suunto Heart Monitoring system is in, and we will have it on display. Stop by and say hi.

People usually come to us for one of two reasons (or both): 1. Get in better shape or, 2. Lose weight. I have talked to AdvantageHealth to bring a nutrition program to the gym over the summer. I have heard that 6 members are interested and 3 more may be interested. We need 20 to make a go of it. This program is open to non-members, so if you’re interested, let us know. Also, I came across a great website last week, http://www.calorieking.com. It is a subscription based site that contains a huge food data base, and combines it with a food and exercise diary to help you set a goal and measure your results. Remember, weight loss is simple: calories in must be less than calories out. Calorieking.com makes tracking this simple.

I love technology. Mostly it makes our life easier, but sometimes crazier because we are always connected.

We are bringing more technology to Core Fit ‘N Motion. I know I’ve written about this before, but we are implementing the Suunto Heart Rate Monitoring System. I got word today that is has shipped from Finland and we should have it next week! This system will allow everyone to tailor their individual training program to get the most of each workout. During the workout each member will see their heart rate on a large screen TV. Following each workout, each member will be emailed a summary report for their workout. As a group, I will have access to a summary report to get information on the group effect of the workout, allowing for more effective periodization in our training program.

For those of you wanting to see more on the system, check out the video on this link: http://www.suunto.tv/index.html?vid=5557910

What Exactly Is The Core?

The core is the beginning point for movement and the center of gravity for the body.  The muscles of the core are divided into two categories:  stabilization and movement.  Stabilization muscles include the transversus abdominis, internal oblique, lumbar multifidus, pelvic floor muscles, diaphragm and transversospinalis.  Movement muscles include the latissimus dorsi, erector spinae, iliopsoas, hamstrings, hip adductors, hip abductors, rectus abdominis, and external oblique.  Many individuals have developed the movement muscle group of their core but not the deep stabilization muscles required for lumbar-pelvic-hip stabilization.  This leads to lack of stabilization and unwanted motion of the individual vertebrae.   The unwanted motion increases forces throughout the lumbo-pelvic-hip complex that may result in low back pain and injury.  Training needs to begin from the inside (stabilization) out (movement).  Core stability allows for distal mobility (throwing, kicking , jumping, batting…).

We had a great day on Saturday at the Delano Business Expo. It was a beautiful day outside but still quite a crowd came through. Here are the winners of our door prize drawings:

Prizes can be picked up at Core Fit ‘N Motion during regular business hours.  Thanks to everyone who stopped by for information or just to say hi!

Here are your winners!

Lynette and Joe both came to the celebration to see who would be drawn as the winner of the March contest. I suprised them, and made them both winners of the Dick’s Sporting Goods gift cards. Both Joe and Lynette came 21 times. That was 7 times more than the next closest attendee (of which there were two). The second place finishers are both 6 am’ers. They came every Monday, Wednesday and Friday available in March – true consistency. Joe and Lynette however, came whenever they could. As the competition raged on, they even came twice a day to workout.

We will be closed Saturday due to the Delano Business expo. I hope to see you all there.

For April are having another contest. The person with the most referrals will receive a 10 punch golf card for River’s Edge (B’s On The River). 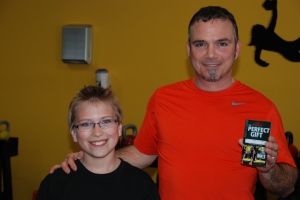 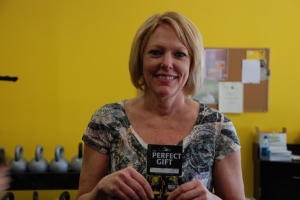 Lynette pulled it off and came twice on Wednesday to tie Joe with 21 classes in March. That means Saturday we will have a drawing for the winner at the month end celebration with Subway, chair massages and beverages. Hope to see you all there!

Our competition is nearing its end. Lynette still holds a narrow lead over Joe. Joe came to our “bonus” workout today and is only one behind Lynette. It should be an interesting finish.

Remember, next Saturday will be the celebration and award ceremony for the Gift Card. Complimentary chair massages will be provided by Delano Chiropractic and I will be providing food and beverages. Bring your families from 12:30-2:30 to show them where you work out.

Saturday April 10th is the annual Delano Business expo, so we will not be holding our normal 11:15 class that day. I may offer a class later in the day as a make-up. The business expo runs from 9-1. Stop by and visit us at our booth.

Great news from Rich. As part of his job, he needs to take a physical fitness test every quarter. He informed me that he increased his pushups and situps by at least 25% from his last test. He also shaved almost 3 minutes off his 1.5 mile run! Great job Rich!!

Bryan’s not one to brag, but his wife tells me he has dropped over 21 pounds!!!! What a difference diet and exercise can make. I’ve said it before, exercise alone won’t help you meet your body transfiguration goals – you need to change your diet as well. If you are looking for diet and nutrition information, check out the link for Precision Nutrition on the right side of the home page.

Flood waters are down, the streets are open. Time to get your workouts in and get ready for swim suit season 🙂

Excitement is on the rise here as everyone waits and watches to see if the Crow River will rise high enough to spill onto the downtown bridge and River Street.  We here at Core Fit ‘N Motion have our fingers crossed that it will not come to that.  As of Thursday evening the river was at 18.81 feet.  The National Weather Service expects the river to crest at 20.5 feet.  This could change by half a foot in either direction though.  The City of Delano will be erecting barriers on River Street that will give protection up to levels of 21.5 feet.  Many of Core Fit ‘N Motion’s members have been helping with the sandbag brigade the last couple of days and I would like to thank them for all of their hard work.   So far, classes are continuing as scheduled and hopefully there will be no need to cancel any.